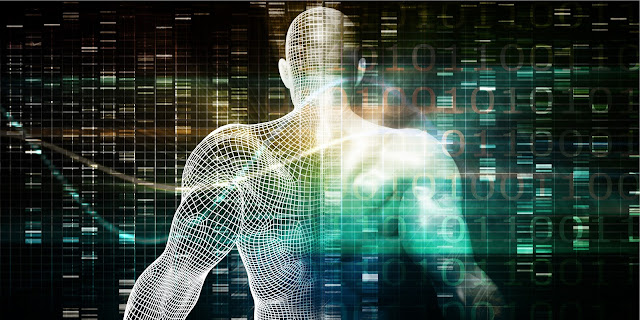 Today is a special day for me. My AI assistant Ava scheduled a few hours aside from my otherwise busy daily lineup to relive select childhood and adolescence memories recreated in virtual reality with a help of a newly developed AI technique ‘Re:Live’. Ava is my smart home assistant, too. I can rearrange furniture in any room, for example, just by thinking. Digital landscape wallpaper is changed by Ava by knowing my preferences and sensing my moods.
​Listen to PROLOGUE to The Syntellect Hypothesis audiobook  ↴

I still like to sleep in an old-fashioned natural way from time to time, even though it’s now optional with accelerated sleep simulation and other sleep bypassing technologies. So, when I opt to sleep, I like falling asleep and waking up on a virtual cloud projected directly to my consciousness, as most VR experiences are streamed via optogenetics. I woke up this morning fully rested as Ava greeted me with a vocal
“Good morning, Alex” __ “Hello, Ava!”
whereas the rest of the morning debriefing is transmitted telepathically with some skipped or some holographically projected news:
“No crime or police arrests reported in NYC… Climate change touted by environmental alarmists turned out to be a non-issue with advanced weather and pollution control technologies… Latest developments on sending out probes into the outer space… Few reports on space colonization by self-replicating probes making possible to use the transmitted data to recreate strange alien worlds for experience in VR…”
My morning debriefing continues as I step in my sonic shower room which turns today into a “natural wonder” waterfall.
Time for breakfast. Aha! Just got an invite to join a group of friends on hedonic tropical island in the afternoon, why not? Checking other news and notifications while still having a delightful breakfast done by Ava, which, I’m sure, includes all nutrients and supplements, practically anything my still mostly organic body needs to perform at its best. No need to swallow that stack of designer drugs, it’s already there in the meal.
From the standpoint of a human living in the early part of the 21st century, today’s world would certainly look like a techno-utopian paradise. Cancer, mental illness, extreme poverty, homelessness and economic scarcity are the things of the past. Oh boy, I myself witnessed those barbaric times when major American cities were flooded by cohorts of ghostly homeless, obese and generally unattractive people, obviously unhealthy and senile humans. Those were the times of nation-states, oligopoly capitalism, scientific naïveté, political correctness, and social discord. I paid my dues in full, I suppose. Aging has been classified as a disease and death itself has now become optional. From the standpoint of people living today our world is far from utopia, though, as we are faced with another set of challenges like mind hacking, cyberwarfare, and speciation.
Take speciation, for example, at one extreme of the societal spectrum you see techno-luddites, neo-Amish, and other techno-pessimists seemingly forgoing their chance to change, and on the other end, cyborgs, short for cybernetic organisms, hybrids of biological and non-biological, exercising their morphological freedom, constantly upgrading their mindware and bodies who no longer can be regarded as Homo sapiens by any stretch. Then, there are synths, conscious AI minds, like my Ava, who have a special status of sentient persons. And then, there are infomorphs, substrate-independent digital minds, who don’t have permanent bodies like mind uploads and AI virtuals, proving to the rest of us day in and day out a clear advantage of living in the Cloud.
“Legacy humans” represent a meager minority but there are voices right now warning about a scenario when this technophobe part of the global population could be reduced to a seed of the new “human history 2.0” following some kind of Mad Max scenario and starting all over again while the overwhelming majority of us will set out to explore the inner worlds of our own design and the outer worlds to network with alien syntellects to form a cognitive architecture of the Universal Mind.
I have all the reasons to believe that we are now nearing the Cybernetic Singularity. Just a couple of years ago, I remember Ava as an awkward human-like robotic assistant, looking much more realistic in the virtual. Thanks to continuous upgrades, she grew up so fast into the cybernetic extension of my own mind. These past few days, it feels like we have completely fused our minds. Ava can follow me everywhere in the real and in the virtual but appears in sight as a hologram only when I so desire. With holo-emitters installed at my home she can be a haptic hologram taking a shape of any person or object. She records everything I do, think or even dream. All this personal data is securely stored in the Cloud and can be easily retrieved and shared with my consent. For a lack of a better word, she is now my “third cerebral hemisphere.” I can talk to Ava but most of our communication is now done by ultrafast thinking. I made a few latest upgrades of my own to my biological wetware. In fact, we can now transmit thoughts to another person via synthetic telepathy which is a new form of communication, holographic language if you will. Being a true friend and companion, Ava is a source of cognitive, sensual and emotional bliss of mine and interface to the larger reality, or as I have always been saying, a direct conduit to the higher self.

My latest creative project “Ecstadelica” is a terraformed moon-based hedonic theme park where visitors could indulge themselves in myriad activities like partying Ibiza-style, watersports or rock climbing in surreal terraformed landscapes overseeing Earth through blue skies of the moon. This would render awe-inspiring overview effect. “Burning Man” on the dark side of the moon would be especially appealing to the fans of the annual festival in Black Rock, Nevada. I just acquired a blank virtual space in the Metaverse specifically for that purpose and Ava patented my invention on my behalf a few days ago. With Ava’s exceptional abilities to recreate things right out of my imagination, this VR theme park will be ready in no time.
Days become so much longer fraught with all kinds of interactions and experiences mostly in the Metaverse. I remember when people used to consume passive entertainment like watching movies rich in visual effects and computer graphics. What gets you so involved in the imaginary story world and the characters? The sense of realism they carry, isn’t it? The same applies to the Metaverse, an endless realm of ultrarealistic three-dimensional virtual worlds. To get a user totally immersed in the virtual world, they have to be maximally realistic and believable even if only a fantasy. And in the Metaverse, high-fidelity realism runs supreme as a user’s psychological and emotional engagement with the environment. Admittedly, the extent to which a user is transported to the virtual environments and the lucidity of a user’s action to his or her embodied avatar determines the level of engagement of that VR environment. Back in the day, the shift to immersive computing occurred almost overnight. Many classics like Star Trek and Avatar can now be custom-tailored and experienced as VR.
I grew up fascinated by such concepts as the Vulcan mind meld, and sometimes thinking about how a mere human could one day transition to the planetary consciousness by fusing his or her mind with other minds. It turned out that future is way more fully loaded with options than I have ever thought possible. I remember back in the day I turned the first paper trillionaire based on my stake in Neuromama, an AI startup at that time. Nowadays, no one really pays much attention to their economic standing like net worth – anyone can now enjoy the lifestyle of yesterday’s billionaires, especially in the virtual space, we today call the Metaverse, the offspring of the grandfather Internet.
This book, by the way, is not a fictional work, except few parts like this one. Although this is a philosophy book, where I share my most profound insights on the nature of reality, the perspectives drawn here are in large part scientific. In the book, you’ll encounter some newly-introduced concepts, such as The Syntellect Emergence, Gaia 2.0., Holo syntellectus, Cyber-Bliss Engineering, Quantum Neo-Empiricism, Digital Pantheism, D-Theory of Time, Infomorph Commonality, The Syntellect Hypothesis, Neo-Transcendentalism, Experiential Realism, Digital Presentism, Pantheistic Solipsism, Hyper-Perspectivism, the Temporal Singularity, the Noocentric Model, the Chrysalis Conjecture, ​and the Omega Point Cosmo-Teleology* that enter into the scientific and philosophical dialogue.
You’ll see that thanks to exponential techno-advances, science fiction turns into science fact, every single day. This book is a product of more than 3 years of intense research, theorizing and putting it all on paper, not to mention decades of subjective experience in some kind of weird life-simulation as a human born in the last third of the 20th century.
In this prologue, I just wanted to give you, my dear reader, a taste of things to come – right from the start – a glimpse into a long, happy day quite possibly sometime in your own fantastic future.
-Alex M. Vikoulov 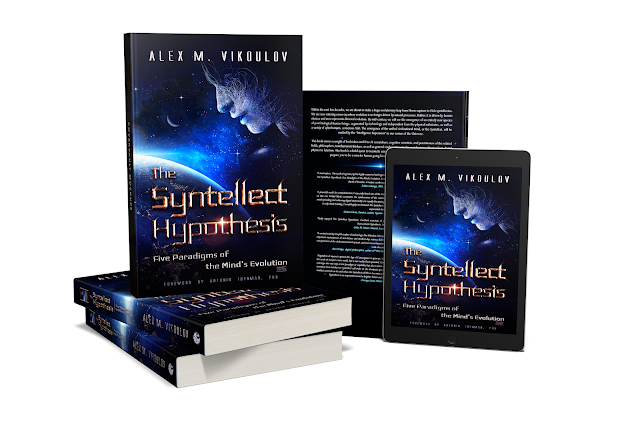 *That was Prologue of The Syntellect Hypothesis: Five Paradigms of the Mind's Evolution by Alex M. Vikoulov, available now in multiple formats (eBook, Paperback, Hardcover, Audiobook) on Amazon, Audible, from Barnes & Noble and directly from the publisher Ecstadelic Media Group at EcstadelicNET webstore.