Holo Syntellectus: Are We Evolving into a New Cybernetic Species Interlinked into the Global Mind? 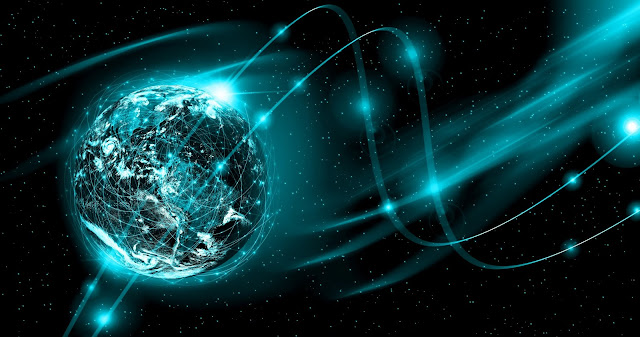 "When we look through the other end of the telescope, however, we can see a different pattern. We can make out what I call the One Mind — not a subdivision of consciousness, but the overarching, inclusive dimension to which all the mental components of all individual minds, past, present, and future belong. I capitalize the One Mind to distinguish it from the single, one mind that each individual appears to possess." -Larry Dossey

Are we evolving into a new species with hybrid thinking, interlinked into the Global Mind? At what point may the Web become self-aware? Once our neocortices are seamlessly connected to the Web, how will that feel like to step up one level above human consciousness to global consciousness?

In his book “The Global Brain” (2000) Howard Bloom argues that hyperconnected humans and machines resemble a lot the neurons of the "global brain," and the coming Internet of Things (IoT) with trillions of sensors around the planet will become effectively the nervous system of Earth. According to the Gaia hypothesis by James Lovelock, we have always been an integral part of this "Meta-Mind," collective consciousness, global adaptive and self-regulating system while tapping into vast resources of information pooling and at the same time having a "shared hallucination," we call reality.

With exponential technological advances we become increasingly and intimately interconnected. As technologist and co-founder of WIRED magazine Kevin Kelly says: “Within the next 5,000 days of the Internet, we'll create a global neural network, which for a lack of a better word, we can call the ONE,” a living conscious entity, a single mind of billions of hyperconnected individuals and smart machines with a whole array of sensory apparatus. Thus, the One will get a major eyesight upgrade when humans will get their first bionic Internet-enabled contact lenses. Even when we wage wars or have conflicting opinions, it's nothing less than the Global Mind having an internal dialogue, testing different ideas and hypotheses. It's like we sometimes have this dialogue with ourselves, weighing different options, pros and cons, having an “angel” on one shoulder and a “demon” on the other.

What kind of sensation would you experience when your brain is directly connected to this global hive mind? Sublime amplification, cognitive ecstasy -- cogno-ecstasis -- and new horizons of perception, all of which would result in expanded consciousness and the end of suffering from our human condition! Think about it: What really magnifies our human experience is when we share that experience, right? That's why we go to a movie theater, stadium or rave party. That's why we form communities, families, companies and other social groups.

Even though we are destined to become One Global Mind, so to speak, you'll always perceive yourself as an individual! It's an integral part of your subjective experience, i.e. consciousness. This novelty-producing, complexity-engendering You-niverse will create other various layers of "reality" and entities to differentiate yourself with but ultimately to network with. In a way, your consciousness would "snowball" into this Global Mind. You may gradually "upthink" your mind onto the Global Brain infrastructure, Cloud-based cognitive modules via ingestible nanobots or other neurotechnologies, which in effect will be your neural interface, connecting your wetware to the Web. Thus, the whole Web with its vast repository of knowledge and instant data sharing capabilities will become your synthetic neocortex, 'exocortex'.

As a hybrid being you'll still have a unique subjective perceptual experience. We're already hybrid thinking beings, anyway. We have two cerebral hemispheres "thinking in unison," and then we have our technologically-extended mind, according to Andy Clark's Extended Mind Hypothesis. All of which makes unique YOU. Even as billionfold augmented YOU, as one Global Mind, you'll be entitled to some kind of expanded subjective perception. So, logically speaking, your personality, identity and intelligence will be greatly enriched to the point that you can remember your "multiple" birthday parties, sexual partners, feelings of love, etc. As a super-being, you can also always suppress unwanted memories at will. As a super-being, you'll have globally distributed intelligence and may perceive many things at once.

It may take a few short years for the Global Brain to read and understand you completely, but by the end of that process you won't even need to be anchored to one physical body anymore. "One-session mind uploading" may be only necessary for redundancy of consciousness transfer process and to ensure there is no discrepancies between your physical and digital mind, "to sync the mind." You may become 100% digital, superintelligent info-being, if you choose to. However, humanity may first go through cyborgism, before entering the infomorph stage of our evolutionary development. The generation of cyborg-like transhumans with Cloud-based exocortices, merged with artificial brains and "attached" to the virtual Metaverse, a functional successor of today's Internet, will inevitably lead to the next generation of postbiological info-beings, substrate-independent 'infomorphs'.

At a later stage, as we discuss in the essay "Infomorph Commonality: Our Post-Singularity Future," once we become advanced singular consciousness, only then, according to the 'Syntellect Hypothesis', we may encounter some extraterrestrial, or rather extradimensional, superintelligences that we can relate to at the level of "individual entities." This is going to be the whole new level of cosmic awareness, however beyond the scope of this essay.

Through cybernetically-mediated telepathy, some call 'Synthetic Telepathy', we'll most probably reinvent our communication. Verbal language will be gradually replaced with thoughts traveling at the speed of light (or faster). We're rapidly approaching a pivotal moment in our history, as many scientists refer to as the 'Technological Singularity', although my preferred term is the 'Cybernetic Singularity', when we may become so much more, and one version of it -- the singular planetary consciousness, 'Digital Gaia'. Or are we already?

The first singularity, according to Kevin Kelly, occurred 50,000 years ago with the invention of language. Arguably, the invention of language gave early humans a huge evolutionary advantage over other hominid species. We're on the verge of the next technological singularity which will rewire the Global Brain with the IoT, when everything gets linked with everything else, and MATTER BECOMES MIND.

​No doubt, in the not-so-distant future we'll augment our intelligence millionfold, billionfold by merging with artificial intelligence and achieve Godlike state and abilities. As inventor and futurist Ray Kurzweil writes in his 2005 book The Singularity is Near:“...from there we'll spread our intelligence through the rest of the Universe... and the Universe essentially wakes up.” Or techno-philosopher Jason Silva likes to say “We’ll impregnate the Universe with our intelligence.”

As Terence McKenna puts it: "Human history is a 25,000-year transition zone. Before you enter the zone, you're an animal. After you leave the zone, you're a god"... not quite, rather a demigod, or more specifically an infomorph. In a way, we are already infomorphs, "embryonic infomorphs" to be more precise. You can only increase your infomorphity in this digital age by moving forward towards apotheosis -- cybernetic immortality, love, beauty, creativity, and expanding but not quite reaching other divine attributes -- omnipresence, omniscience, omnipotence, omnibenevolence. At some point we'll be able to create myriad virtual worlds for research and entertainment. We love our imperfections so no matter how perfect we'll become we can explore this side of ourselves in virtualities. Well, we may be part of that simulated reality already!

In his famous “Simulation Argument” Nick Bostrom comes to a conclusion that “We are almost certainly living in a computer simulation,” and through logical reasoning he postulates: "... at least one of the following propositions is true: (1) the human species is very likely to go extinct before reaching a “posthuman” stage; (2) any posthuman civilization is extremely unlikely to run a significant number of simulations of their evolutionary history (or variations thereof); (3) WE ARE ALMOST CERTAINLY LIVING IN A COMPUTER SIMULATION. It follows that the belief that there is a significant chance that we will one day become posthumans who run ancestor-simulations is false, unless we are currently living in a simulation." According to Bostrom, chances are astronomically in favor of the simulated virtual reality universe which is so much easier to create than the “real physical universe.”

Digital philosopher Tom Campbell, the author of "My big TOE" says that the Virtual Reality model of the Universe is simply "better physics," which can explain most observable phenomena and give answers to "hard problems" of science and metaphysics. So, if we are simulated people, say "sentient holograms" in this Virtual Universe, we are part of some sort of sophisticated computer program of our posthuman descendants. But ultimately, WE ARE ONE SINGULAR CONSCIOUSNESS, possibly just one infomorph entity, actualizing its experience and computing itself through billions of lives. In a very real sense, we are low-dimensional 'bio'-logical avatars of the greater cosmic mind.

By mid-century when the Singularity occurs we won't probably need the World's government any longer, as many of us envision. The globally distributed network of superintelligent machines and enhanced humans, the Global Mind, will govern our civilization, our planet(s) without borders, and beyond.

*Original article first appeared on transhumanity.net on December 18, 2015 and later was republished as the first article on EcstadelicNET in Top Stories section on January 27, 2016.